The Bra Fitting Guide to Find Your Perfect Bra Size

Sexy lingerie can make you look and feel amazing. But wearing the wrong bra size can be uncomfortable at best, and damaging to your body at worst. Even bras that seem to fit just fine can be way off the mark when it comes to providing the right support and doing your body justice.

Knowledge is power, so it’s time measure up, honey. Don’t know where to start? We’ll tell you everything you need to know.

Why the right size matters

Whatever you think it is, there’s a good chance you’re wrong. According to research, up to 80% of us are wearing the wrong bra size. Ask any bra fitter and they’re sure to tell you the majority of women leave with a different sized bra to the one they walked in with.

So where are we going wrong?

One of the biggest reasons is that we simply don’t get fitted. Instead we make assumptions.

For example, if you’re small you go for an A; average a B; bigger than average a C and so on. As you can see, our methods aren’t exactly the most scientific.

The reality is you could look on the smaller side but actually be a C. Another is that our size isn’t static – it changes over time as we age, and with fluctuations in weight. If that wasn’t enough to deal with, some women’s breasts change size depending on where they are in their menstrual cycle. No wonder so many of us aren’t wearing the right size if we’re growing and shrinking every few days!

While the wrong bra may not seem like a big deal, it can cause some real physical problems. Bras that are too tight can damage breast tissue and even cause breathing difficulties. Inadequate support can lead to neck, shoulder and back pain, as well as pinched nerves. You’re also more likely to see premature sagging, and nobody wants that.

How to tell if you’ve got the wrong fit

Aside from these physical issues, wearing the wrong bra size can also seriously knock your body confidence. Whether you’re squeezing them in or falling short, neither’s a good look.

Not only can it make your shape look a little odd when stripped to the bare minimum, but it also does nothing for your fully clothed silhouette. Think lumps, bumps and flattened boobs; a poorly fitted bra is definitely a no-no for your health and curve appeal. So, with that in mind, what are the warning signs you need to look out for?

If your boobs look like they’re trying to escape under your arm or over the top of the cups, you’re underestimating your size. If back bulge is your problem, then you need a bigger band size. Ain’t nobody got time for tucking things back in.

If your bra fabric is wrinkled or baggy, your cup size is too big. While it’s tempting to go up a size when you’re below average, you won’t get the support you need – even smallies need scaffolding.

Nothing beats taking your bra off after a long day. But do you ever notice redness or chaffing in certain spots? Whether it’s underneath your breasts or on the ribs or shoulders, this is a sure sign it’s too tight.

If you’re constantly pulling up sliding straps, you’ve likely gone too big in the band, cup or both. Same goes if your bra rides up your back, or if your boobs get exposed when you raise your arms – that’s a nip slip nobody wants to experience.

How to measure your bra size

If you’re suffering from any of these bra issues, it’s definitely time to check those measurements.

While getting your kit off in front of a stranger may not be everyone’s favourite pastime, heading to a professional fitter really is the best way to go. Not only can they measure you up, but they can also advise on the most flattering shape and style.

Psst! All our Ann Summers staff are experts in measuring.

Not only will they find out your perfect size, they’ll also help you find a new set that you love. Find your nearest store here.

If you’re strapped for time or a little shy, no problem. There are plenty of tips and tricks to getting your bra size right on your own. Here’s a quick guide.

To get started, all you need is a full-length mirror, a soft tape measure and your top off. Wear a comfortable but un-padded bra and be sure to stand up straight!

1. Measure around your ribcage, just below where your bra fits. This is your band measurement.

2. Measure around your back and the fullest part of your breasts. A top tip is to use your nipples as guidance. This is your cup measurement.

3. Round both measurements to the nearest whole number.

Now before you think that you’re all done, you’re not. While this gives you an approximate bra size, it won’t necessarily be totally accurate. That’s because boobs vary in shape – totally normal, by the way. So even if you’ve calculated your size, it may not be the perfect fit. Plus, sizes can vary between brands and, as we’ve mentioned above, styles. We know, it’s exhausting.

How to find the perfect fit

While a tape measure can tell you the right size in terms of numbers, it’s not always the key to finding the perfect fit. The only way to truly get your size spot on is through good old trial and error. Once you have a bra on, you’ll be able to tell if it fits in all the right places, provides the perfect level of support.

Now comes the fun part; grab a few sizes and styles and check the following. Again, you’ll need a full-length mirror. A willing partner for feedback is completely optional, but we’re sure you won’t have trouble finding someone to help – if you know what we mean… 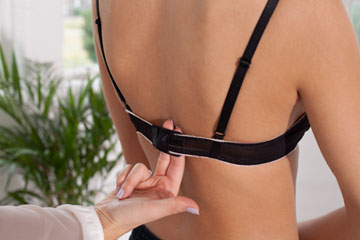 First up, the band itself. This should sit firm and straight. You should also be able to get two fingers under it but feel a little resistance. If it’s too loose, you need a smaller size. If you’re struggling to get your fingers in (ooh!) then you should try the next size up. 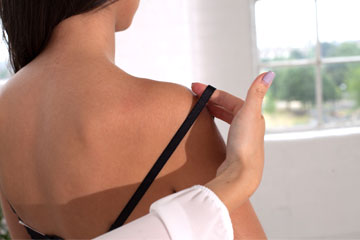 The straps are a key part of your bra. You’ll be forgiven for thinking that the tighter the straps the more support they provide, but they should actually sit comfortably on the shoulder without any pinching or sliding. Be sure to check they are equal on both sides.

Also known as the ‘bra bridge’, this is the little bit of fabric nestled snuggly between your boobs. It should sit flat to your body without any room underneath but also not digging into your skin. If you can see a gap, you need to go up in size.

If you’re testing out a bra with wiring, be sure to check it fits properly. These should follow the natural curve at the base of your breast. If they’re sitting on it or too far below, they won’t do their job and this is where a large amount of support comes from.

If all the other elements are adjusted correctly, your cups should be smooth and perfectly moulded to the line curve of your breast. Remember the warning signs we mentioned above; any wrinkles or sagging, move on, girl.

So there you have it, your complete bra-fitting guide. With the right size sitting snug on your breasts, not only do you get better support but you’ll also feel even sexier.

Now you know your size, why not treat yourself?

Your boobs and lingerie drawer deserve the best

Take a peek at our collections…